salt water pools are easy on the eyes, skin, and hair

One of the biggest advantages of salt water pools is that they’re much softer on the eyes and much less drying to the skin than traditional chlorine pools.

People with skin problems, or swimmers with a sensitivity to chlorine, notice the soothing benefits of salt water systems. If you’re used to swimming in regular pools, you’ll notice less eye redness, less itchy and dry skin, as well as less bleaching to bathing suits.

HOW LONG DO SALT SYSTEMS LAST?

A well-maintained salt water chlorinator system should last you anywhere from 5 to 10 years. When it’s time to replace the cell or the board, you can expect to spend anywhere from $500 to $1,100 depending on what part you need to replace and your particular system.

What you don’t want to do is cause them to go out before the end of their lifespan. Improper cleaning—or too-frequent cleaning—of the cell is the leading cause of early replacement.

The circuit board, on the other hand, is just like any electronic device. It could last years, or something may cause it to burn out. Making sure it’s properly covered and off during electrical storms is your best defense against early outages.

The control center of the system, its primary purpose is to provide electricity to the salt chlorine generator for the conversion process. It also allows you to control the amount of electricity sent to the cell, thus allowing you to increase or decrease the amount of chlorine in the pool.

Pool owners without a saltwater chlorine generator system use liquid chlorine or tablets to maintain sanitizer levels in the pool. While effective, buying, transporting, storing, and using chlorine is not fun. For example, liquid chlorine is volatile, loses potency extremely quickly, and is dangerous to skin, eyes and to breathe.

While a salt water swimming pool may need to occasionally have the chlorine levels manually adjusted you can usually accomplish this using tablet or granular forms of chlorine so you don’t need to use liquid chlorine at all.

ANATOMY OF A SALT CHLORINE GENERATOR

Now that we understand how the basic chemical process works, let’s take a deeper look at the basic parts of a salt generator.

The cell is the part of the system that actually converts salt into chlorine. Water passes through the cell and over solid plates that are coated with ruthenium or iridium. These naturally occurring metals are charged from the control board and allow the salt to convert to chlorine through electrolysis.

One of the biggest complaints of chlorinated swimming pool water is the chlorine smell, even after you get out of the water.

While this smell is actually a result of a buildup of chloramines in the water, salt water pool owners note markedly less chlorine smell after swimming. 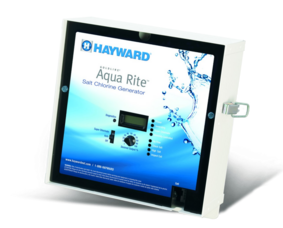 To make your salt water chlorinator last, you’ll need to perform regular maintenance on it just as you do every other part of your pool.

It’s important to note that salt chlorinators do not create a chlorine-free pool. They use dissolved salt to create chlorine to clean the pool.

Using electrolysis, dissolved salt is converted into hypochlorous acid (HClO) and sodium hypochlorite, the sanitizing agents used to rid the water of dirt and bacteria.

When choosing a chlorinator come in and see us, keep a few things in mind:

Using a salt chlorine generator will allow you to take a lot less time to balance and maintain the water in your pool.

This mostly has to do with the sanitizer being mostly automated through the salt water system, leaving you to worry only about the calcium hardness, pH balance, and total alkalinity under regular conditions. 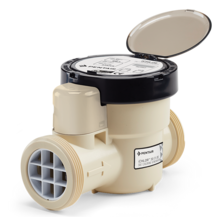 save money on chemicals

Salt is the base ingredient used to create chlorine in a salt chlorine generator. Since salt doesn’t dissipate in the water like other pool chemicals, the initial dose of salt you put into your pool will remain there throughout the season. Only when you physically remove water from the pool do you lower the salt level.

In a regular pool season, you may need to add a single bag or two of salt to top off your system and keep the salt in the range at or as close as possible to 3,200 ppm. Even the next season you may only need to add one or two bags to start off the year.

HOW MUCH DOES A SALT CHLORINE GENERATOR COST?

There’s no denying salt chlorinators are much easier to maintain compared to other filtration systems. But that convenience comes with a commensurate cost.

When installing a salt chlorine generator, you can expect to pay more for the equipment and initial setup. Since the cell and the control board don’t last forever, you can also expect higher costs when it comes time to replace them as well.

Still, that added cost can make your daily pool maintenance so much easier you may decide it’s worth it.

For the salt generator itself, you may spend between $800 and $1,000, depending on the brand. The salt is pretty inexpensive, depending on how big your pool is.

The bigger the pool, the more money you’ll spend each year on large bags of salt, but you won’t spend money on chlorine. That’s the tradeoff in the long run.